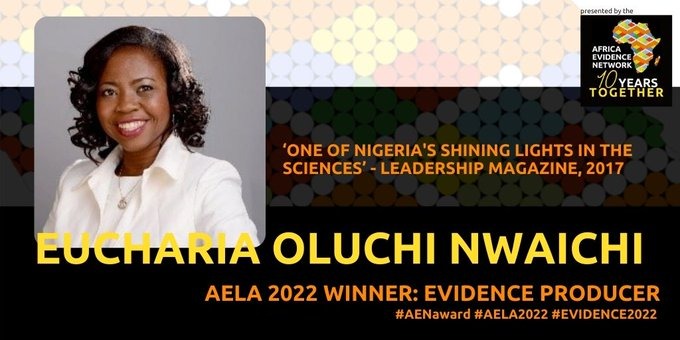 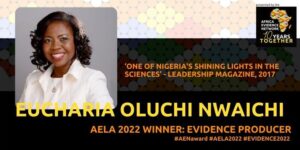 Eucharia Oluchi Nwaichi is an Associate Professor, a seasoned environmental biochemist, director of exchange and linkages, and president of the Organization for Women in Science in the Developing World at the University of Port Harcourt, Nigeria. She has been described as ‘One of Nigeria’s shining lights in the Sciences’ by Leadership magazine in 2017, the awardee of the Evidence Leader by the African Academy of Sciences (AAS) and the African Institute for Development Policy (AFIDEP) in 2020, and recognised for her great efforts by Silverbird Television as one of ‘16 Prominent Nigerian Women That Excel in Science and Research’.

The Africa Evidence Network is proud to celebrate Eucharia as an evidence champion whose work has generated credible and robust evidence addressing sustainable development goals focusing on poverty, health, water and sanitation, climate change and sustainable cities. Some highlights of her recent works includes;

In 2017 she embarked on advocacy initiatives with the Ministry of Environment for uptake of her patented remedial technology in the approved protocol for remediation of polluted soils. Her significant interventions brought about evidence-informed decision making in a government department enlisting biological technology for polluted soil clean-up option given advanced advantages from evidence generated from her work.

In 2020, using a secured grant, she engaged an agency of government, the Nigeria Natural Medicine Development Agency (NNMDA) and this brought about the formation of an Evidence team of policymakers and technical staff of the agency and researchers that worked closely with her for ten months. The project focused on the development of guidelines for Evidence use in NNMDA, building capacity for formulating contexts, accessing, appraising, synthesis and application of evidence in decision-making and the project produced five policy briefs and launched guidelines.

In 2020 using her grant from the Royal Society of Chemistry, she produced robust evidence in the inclusion and diversity challenges faced in the practice of Chemistry.